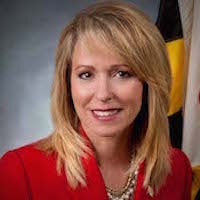 At DLLR, she was responsible for managing an agency with nearly 2,000 employees and an operating budget of more than $375 million. Under her leadership, Maryland’s apprenticeship program grew to its highest level since 2008, with more than 10,000 apprentices statewide. DLLR’s Employment Advancement Right Now (EARN) Maryland program received national recognition for both innovation and effectiveness and was named one of the Top 25 programs in the 2018 Innovations in American Government Award competition.

A former member of the Maryland House of Delegates representing Frederick County, she served on the Economic Matters Committee from 2011- 2015. In addition to local issues, then Delegate Schulz took special interest in legislation relating to banks and other financial institutions, business, occupations and professions, economic development, labor and employment, unemployment insurance and workers’ compensation.