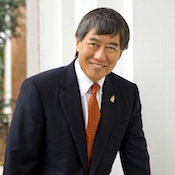 Born in China, Loh moved with his family to Peru. After high school, he immigrated to the United States and became a naturalized citizen.