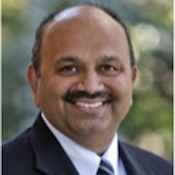 Amitabh Varshney is a Professor of Computer Science and Dean of the College of Computer, Mathematical, and Natural Sciences at the University of Maryland, College Park. In his research, Varshney explores applications of high-performance computing and visualization in engineering, science, and medicine. He has worked on a number of research areas including visual saliency, summarization of large visual datasets, and visual computing for big data. He is currently exploring applications of virtual and augmented reality in several applications, including healthcare and telemedicine. Varshney is a Fellow of IEEE and has served in various roles on the IEEE Visualization and Graphics Technical Committee, including as its Chair (2008–2012). He also received the IEEE Visualization Technical Achievement Award in 2004.