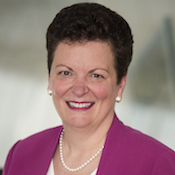 Dr. Guay-Woodford is the Hudson Professor of Pediatrics and Associate Vice President for Clinical and Translational Research at The George Washington University. She is a pediatric nephrologist and an internationally recognized investigator whose research focuses on identifying clinical and genetic factors in the pathogenesis of inherited renal disorders, notably autosomal recessive polycystic kidney disease. In 2009, Dr. Guay-Woodford was awarded the Lillian Jean Kaplan International Prize for Advancement in the Understanding of Polycystic Kidney Disease, given by the PKD Foundation and the International Society of Nephrology. She has published over 120 peer-reviewed reports and more than 50 reviews and book chapters.

Over the past 12 years, Dr. Guay-Woodford has played multiple leadership roles in promoting clinical and translational research, including establishing and directing (2005-2012) the NIDDK-funded University of Alabama at Birmingham (UAB) Hepato-Renal Fibrocystic Disease Research and Translational Core Center, and serving as the founding Director of the UAB CTSA program (2008-2012). In 2012, Dr. Guay-Woodford was recruited to direct the CTSA-funded Clinical and Translational Science Institute at Children’s National (CTSI-CN), as well as to lead the Center for Translational Science in the Children’s Research Institute. She has mentored numerous residents, fellows, and junior faculty. In addition, she serves on the External Advisory Committees for multiple CTSA programs, as well as several NICHD-funded K12 programs.