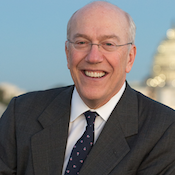 Kurt Newman, MD, is President and CEO of Children’s National Health System. Located in Washington, D.C., Children’s National is ranked one of the nation’s best pediatric hospitals by U.S. News & World Report and is a leader in NIH pediatric medical research funding. Dr. Newman has been a surgeon at Children’s National for over 30 years and also is professor of surgery and pediatrics at George Washington University School of Medicine & Health Science. He guided the creation of the Sheikh Zayed Institute for Pediatric Surgical Innovation, with the goal of making children’s surgery less invasive and pain free. As CEO, he is a champion of innovation in research, operations, and clinical care. He is a strong advocate for expanding mental health access for kids and has led two national forums on this issue.  Dr. Newman also plays a critical role in improving pediatric health and well-being nationally through his work on the Boards of the Children’s Hospital Association and Safe Kids Worldwide and as the author of numerous scientific publications. His medical memoir, “Healing Children: A Surgeon’s Stories from the Frontiers of Pediatric Medicine,” debuted as an Amazon bestseller in Pediatrics and earned national attention and critical praise in The New York Times Book Review, The Washington Post and Harvard Business Review.

Dr. Newman is a graduate of the University of North Carolina at Chapel Hill, and of Duke Medical School. He completed his surgical residency at Brigham and Women’s Hospital and Harvard Medical School before joining Children’s National.