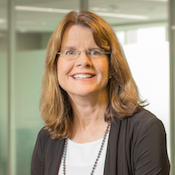 Anne Lindblad, PhD, joined The Emmes Corporation in 1982 as a Biostatistician and is currently the President and CEO. She has supported clinical research throughout her career, serving as Principal Investigator of projects spanning diverse disease areas, including oncology, dialysis, transplantation, ophthalmology, speech and hearing, dentistry, and neurology. She has co-authored numerous publications in each of these areas and has witnessed first-hand the challenges in conducting sound research. From this experience, she has contributed to the literature in such fields as patient-reported outcome development, central monitoring as part of a risk-based approach, disease classification systems, and barriers to recruiting for clinical trials.

Dr. Lindblad has been an NIH reviewer on multiple project applications for NEI, NICHD, NIDCR, NIDDK, NINDS, and NCCAM and has served as a member or chair of several Data and Safety Monitoring Committees for NEI, NIAAA, NIDDK, and NINDS and Industry. She was a member of an Advisory Committee charged with drafting policy to shape the appropriate planning and conduct of intramural studies at NIH. She was elected to the Board of Directors for the Society for Clinical Trials (2003-2006) and served as Program Chair (2002), as an Officer (2006-2014), and as President (2012-2013). Dr. Lindblad was selected to serve on NIH’s National Advisory Dental and Craniofacial Research Council from 2004 through 2008. She has taught courses in best practices in clinical trial design and conduct for ophthalmologists, neurologists, and immunologists.