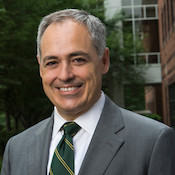 Ángel Cabrera is the president of George Mason University, Virginia’s largest public research university operating several campuses across the Washington, D.C., metropolitan region and in Incheon, South Korea. Since 2016, Mason is one of the 115 universities in the United States selected for the highest research category of the Carnegie Classification of Institutions of Higher Education.

Before becoming Mason’s president in 2012, Cabrera led IE Business School in Madrid, and Thunderbird School of Global Management, now affiliated with Arizona State University. Cabrera is the first native of Spain to have served as president of an American university.

Cabrera chairs the Commission on International Initiatives for the Association of Public and Land-grant Universities, and serves on the advisory boards of the Council for the International Exchange of Scholars (Fulbright Program), Georgia Institute of Technology, and ITESM in Monterrey, Mexico. He serves on the boards of the Federal Reserve Bank of Richmond, National Geographic, the Bankinter Foundation of Innovation in Madrid, and other civic organizations. He has served on the corporate boards of three public companies: eFunds, PetSmart and, currently, Inovio Pharmaceuticals.